To comply with the new European standards on pollutant emissions, as of 2021 all the Ducati Streetfighter V4 range models now comply with Euro 5 anti-pollution regulations.

New front brake pumps and a self-purging clutch have also been introduced, both originating from those used for the first time on the Superleggera V4.

Only for countries where Euro 5standard applies.

Ready for the challenge

There are a multitude of engineering and technological aspects conceived for this champion road bike. A balance of distinctive lines, brutal output, state-of-the-art technology and components have been combined in this “Fight Formula” of the Streetfighter V4.

The Fight Formula in Black

The new Dark Stealth colour scheme which makes the look of the bike even more thrilling.

Dark Stealth is electrifying, trendy, aggressive, the perfect colour scheme to flaunt the “badass” side of the Streetfighter V4 S and attract attention when riding it.

The Panigale V4 stripped of its fairings and with high-and-wide handlebar. This is the design concept behind the new Streetfighter V4, a bike that can amplify the emotions of its rider and make them feel like the leader of the pack on every outing on the road. The result is an unrivalled, contemporary, technology-packed naked bike, with a powerful and exciting design that does nothing to hide its performance.

The minimalist design of the full-LED headlight perfectly captures the essence of the Streetfighter V4 – reminiscent of the Panigale V4’s front end and at the same time evocative of the deranged look of the comic book character who inspired the designer of the Ducati Design Center in creating the new naked from Borgo Panigale: the Joker.

The Ducati signature style is represented by the V-shaped DRL which already characterises the Panigale V4 and SuperSport.

The compact front light unit is housed in a carefully designed double-layer fairing that accommodates the air inlets for the airbox and for cooling the LED lights, while a rear deflector ensures that the air flow is not aimed straight at the fuel tank.

The headlight is mounted on the 5” TFT instrument panel (the same as the one used on the Panigale V4) featuring a sophisticated front over that stylishly conceals the connections and wiring.

The low forward angled front mirror the lines of the fuel tank to give the Streetfighter V4 the look of a predator awaiting to pounce.

The Front Frame and the Desmosedici Stradale are kept as much in view as possible, partially covered by minimal fairings and covers with sharp lines and sculpted volumes that create an uncluttered, essential look. The F1-derived air extractors stand out from behind the radiator.

They have structural function, connect directly to the frame and incorporate double stacked wings – another MotoGP-derived element – that generate the vertical load necessary to ensure maximum stability at high speeds. The colour scheme with the double red area with the black extractor in the centre emphasises the dynamic look of the bike when viewed from the side.

Fast, agile mixed-road performance demands maximum stability at high speed and when braking, reduced wheel-up during acceleration and minimised electronic control of the suspension set-up: that's why Ducati Corse specialists have, together with the Ducati Style Centre, developed biplane wings for the Streetfighter V4.

To reduce lateral protrusion as much as possible, the aerodynamics team decided to adopt a 'biplane' configuration of limited 'wingspan' with upper and lower wings working independently.

Each appendage can be described as a square-plan mono-wing with a winglet on its outer tip. Moreover, the wings have been positioned as close as possible to the front wheel (near the radiator side panels) to maximise the anti wheel-up effect.

These aerodynamic appendages generate 28 kg of downforce at 270 kph (20 kg on the front wheel, 8 kg on the rear). The wings also help draw heat off the engine by increasing water and oil radiator throughflow speeds by 2% and 10% respectively.

Wing-generated downforce attenuates front wheel 'floating' at high speed and the tendency to wheel-up. It also improves stability during braking at the turn-in point and through the corner.

With the arrival of 2021, all the bikes in the Ducati Streetfighter V4 range become compliant with the Euro 5 anti-pollution regulations, keeping the maximum power and torque values unchanged, but repositioned at different speeds.

The silencer, unchanged from an aesthetic point of view, uses oversized catalysts (+10 mm in length) and a new technology of insertion of noble metals, essential to maximize the ability to convert polluting gases.

Compared with the Euro 4 models, the rear bank manifolds have been shortened by 100 mm and reduced in diameter from Ø 42 mm to Ø 38 mm. The new component has allowed the introduction of a more compact rear heat shield integrated in the body of the motorcycle.

Also in favor of reducing emissions, the introduction of 4 lambda sensors, one for each cylinder, which allow a more refined control of the quantity of fuel injected.

The Desmosedici Stradale was designed around the heart of the MotoGP V4 engine – its cylinder heads.

The fluid dynamics concept of the Desmosedici Stradale is based on the dimensions and geometry used in the Desmosedici GP bike, as is the engine layout: 90° V4 banked rearward 42°. This solution makes the engine extremely compact, allowing the centring of the masses and better integration into the bike.

The 81 mm bore is the same as that used on the Desmosedici GP, the maximum size allowed by MotoGP regulations, and is the largest in the Supersport 4-cylinder segment. The 53.5 mm stroke is longer than the GP engine, to provide increased torque when used on the road, and reduce maximum engine rotation speed. The use of the same bore as the Desmosedici GP engine means that all the fluid dynamics, which in fact make up the heart of the engine, are also very similar in the two drive units.

The V4 90° layout makes the engine extremely compact, allowing the centring of the masses and better integration into the bike. In fact, the Desmosedici Stradale has been inserted into the vehicle with the front bank of the cylinders rotated back by 42° with respect to the horizontal plane, as on the Ducati engines competing in MotoGP.

This optimises the distribution of weight, allows for the use of more extensive radiators and makes it possible to shift the swinging arm pivot forwards. Its architecture also generates a natural balancing of first-order forces, without the gain in weight and loss of power of a balance shaft.

Compared to the Panigale V4, the riding position - with an above-ground height of 845 mm - has been redefined as per the specifications of a naked model. In keeping with streetfighter culture, the semi-handlebars have been replaced by a high, wide bar that, together with a seat with 60 mm of foam thikness and moderated footpeg position, ensures sports-style comfort during inner city rides and the control needed to tackle country roads or racetracks.

While maintaining many of the Panigale's stylistic features, the tail is supported by a steel subframe and has been redesigned to enhance passenger comfort and give the rider more lengthways space.

The Streetfighter V4 features the Front-Frame - an offshoot of Ducati's extensive experience in MotoGP - which uses the Desmosedici Stradale engine as a load-bearing member.

Compared to traditional perimeter frames the main lay-out difference is that the engine is used as a structural chassis element. Weighing just 4 kg, the compact Front-Frame is attached directly to the upper crankcase of the front cylinder bank and the cylinder head of the rear bank; the V4 crankcase also provides the rear suspension attachment point and the single-sided swingarm pivot mount.

The key advantage of the Ducati Front-Frame is that it uses the Desmosedici Stradale engine to achieve the desired stiffness: this has resulted in significantly lower main frame length and weight and a better stiffness/weight ratio. Moreover, the struts alongside the engine have been shortened, making bike design more compact, especially in the rider's seat area.

Completing the chassis is the under-seat Trellis subframe, attached to the Front-Frame at the top and bolted to the head of the rear cylinder bank below.

The rear suspension linkage mechanism is attached to the Desmosedici Stradale engine via a forged aluminium bracket. The linkage reacts to movements imparted by a cast aluminium high-truss swingarm.

The fork bodies house chrome sliders with Brembo radial caliper mountings. A Sachs steering damper completes the front-end package. At the rear there is a fully adjustable Sachs shock absorber, one side of which is attached to the Desmosedici Stradale engine via a forged aluminium bracket.

The Streetfighter V4 S, instead, is equipped with an Öhlins NIX-30 fork, an Öhlins TTX36 rear shock absorber and an Öhlins event-based steering damper. On this version suspension and steering damper are controlled by the second-generation Öhlins Smart EC 2.0 system which, among other things, features the new OBTi (Objective Based Tuning Interface).

The rear tyre compound has been designed by Pirelli specifically for the Streetfighter V4. It ensures the same dynamic behaviour as the Supercorsa SP race replica tyres mounted on the Panigale V4, but has better low temperature performance to ensure the versatility one expects from a naked.

Brembo double callipers have four 30 mm diameter pistons each and work on 330 mm diameter discs for an unparalleled braking power. Whilst the rear system incorporates a single 245 mm disc with a 2-piston calliper. The braking system is supported by the ABS Cornering EVO system, which uses the lightweight 9.1MP control unit.

With the MY2021, new front brake pumps and a self-purging clutch have also been introduced, both originating from those used for the first time on the Superleggera V4. The new pump unit has been designed with a unique configuration to allow “natural” purging, hence eliminating the need to intervene on the system if any air gets into the circuit.

As on racing bikes, the 16-litre aluminium tank has a section that extends under the seat. Compared to the Panigale V4, the lower section of the tank has been modified to allow installation of a seat with thicker padding to boost rider comfort.

Up front, the space not occupied by fuel has been used to house all the electronics, battery included.

The latest-generation electronics package on the Streetfighter V4 is based on a 6-axis Inertial Measurement Unit (6D IMU) which instantly detects the bike's roll, yaw and pitch angles.

The electronics package has controls for every part of the ride: some oversee start, acceleration and braking, others govern traction and others again lend a helping hand on corners and out-of-the-corner stretches.

Operational parameters for each of these controls are associated by default with the three Streetfighter V4 Riding Modes. Riders can personalise parameters to suit their riding style or restore Ducati factory settings. DTC, DWC, DSC or EBC control levels can be adjusted quickly via the left switchgear.

The Streetfighter V4 features the same 5" full-TFT high resolution colour screen (186.59 PPI - 800xRGBx480) as the Panigale V4. The dashboard is dominated by the round virtual rev counter on the right. Desmosedici Stradale revs are displayed on a needle gauge.

Movement of the latter is accompanied by a white trail that acts as a 'shift light', changing colour from white to orange and then red as the rev limit approaches.

The rider can call up two different lay-outs: 'Track' highlights the lap times and the rev counter scale makes the revs typical of track use more clearly visible; 'Road', instead, replaces lap times with info on the Ducati Multimedia System (DMS), where present, and the rev scale is more appropriate for road use. 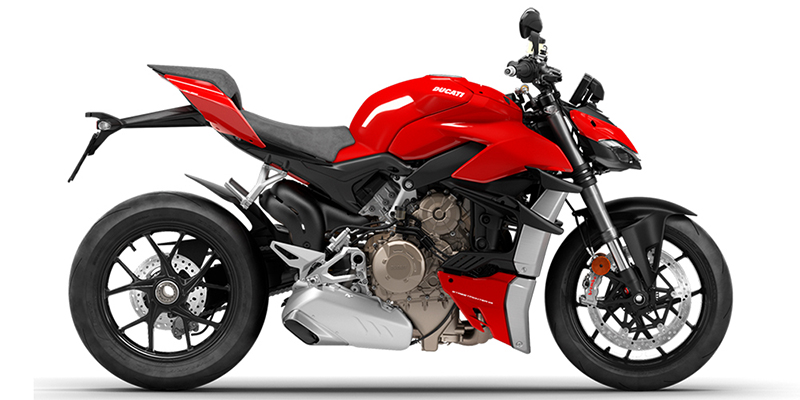