2019 marks a quarter of a century since the Ducati 916 - designed by Massimo Tamburini - arrived on the global stage and instantly becoming an icon of modern motorbike racing.

The Ducati 916 wasn't just a great bike, it also won World Superbike championships: the 916 SBK was a force to be reckoned with even as it made its debut and the following years saw it win 120 races, 8 constructors' titles and 6 riders' titles, four of them with Englishman ‘King’ Carl Fogarty. Even now, the English racer and the 916 remain the most successful 'couple' in Ducati SBK history.

To celebrate the 25th anniversary of the legendary 916, the Panigale V4 25° Anniversario 916 was born in a limited and numbered version of 500 units.

The 25° Anniversario 916 is built on the mechanics of the Panigale V4 S. This has been upgraded with racing content from the Panigale V4 R such as the Front Frame, designed to Ducati Corse specifications, the dry clutch and even more track-specific electronics, such as Ducati Quick Shift EVO 2, optimised for aggressive gear shifts, and 'predictive' Ducati Traction Control EVO 2.

The look of the bike combines a colour scheme that takes its cue from the Ducati 996 SBK (winner of the 1999 World Superbike Championship) with forged magnesium Marchesini Racing wheels, a titanium type-approved Akrapovic exhaust and a long list of carbon fibre and billet aluminium components

The Panigale V4 25°Anniversario 916 is a limited and numbered version of 500 units.

The new Panigale V4 25° Anniversario 916 is characterised by livery inspired by the Ducati 996 SBK, winner of the 1999 World Superbike Championship with Carl Fogarty. The graphics, based on Ducati Red, are distinguished by the number holders of the front and the fairings, where the World Champion's number "1" is proudly placed.

The Panigale V4 25° Anniversario 916 is a limited and numbered version of 500 units.

The Panigale V4 25° Anniversario 916 is based on the mechanics of the Panigale V4 S evolved with components and racing solutions from the Panigale V4 R. Standard equipment includes Marchesini Racing forged magnesium wheels, approved Akrapovic titanium silencers, and several carbon fibre and billet aluminium parts, which together reduce the weight by 1 kg compared to the V4 S version.

The Panigale V4 25° Anniversario 916 is powered by the 1,103 cm³ Desmosedici Stradale engine. A 90° V4 engine with Desmodromic timing system derived from the MotoGP is the only one of its kind in terms of its counter-rotating crankshaft and the "Twin Pulse" firing sequence. The engine can deliver a power of 214 hp at 13,000 rpm, and a torque of 12.6 kgm at 10,000 rpm, which makes it absolutely enjoyable, even on the road.

In terms of its chassis, the Panigale V4 25° Anniversario 916 boasts the best you could wish for.

The Panigale V4 25° Anniversario 916 is equipped with a state-of-the-art electronic package, based on the use of the Bosch 6-axis inertial platform (6D IMU – Inertial Measurement Unit) that includes controls to manage all the riding phases. 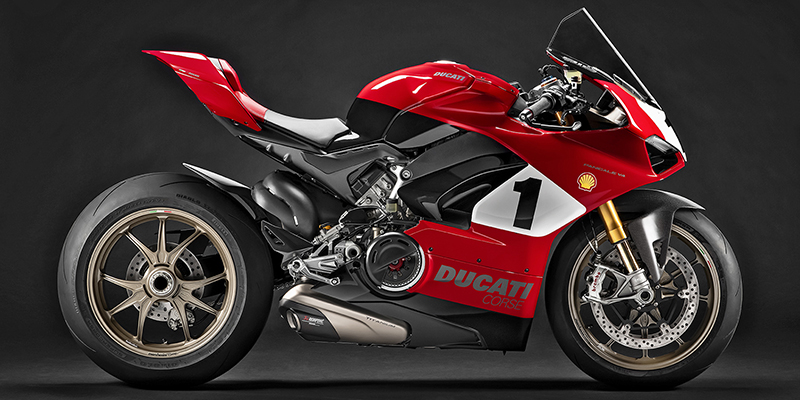